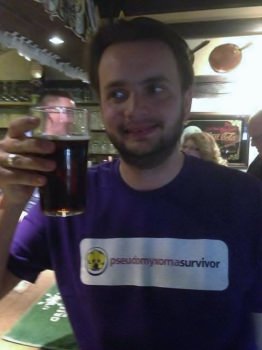 I decided to help raise money for Pseudomyxoma Survivor when I found out my friend Kirsty was diagnosed with pseudomyxoma peritonei (PMP). I was in shock that she had developed cancer. You never think it will happen to someone you know, especially when they are the same age as you. At the time, I had never heard of PMP and only heard about Pseudomxoma Survivor when Kirsty told me the support the charity has given her and her husband.

I went to visit Kirsty at Basingstoke Hospital and was very impressed with the facilities and with the support that the charity provides for patients with PMP. Kirsty’s attitude towards beating the cancer was amazing. After speaking to both Kirsty and David, they were extremely grateful for the skills of the surgeons, staff and the support from Pseudomyxoma Survivor.

I decided I would try something different and stopped drinking alcohol for 100 days. I am not very good at sport and could never run a marathon so I decided to not drink for 100 days, which I knew was not going to be pain-free! Going to parties and weddings were difficult, but I was never going to give in. It was easy compared to what both Kirsty and David had been through.

In the end, I raised over £700 which was amazing; I had set a target of £500. It was fantastic to see the amount of generosity from my friends and family, who also gave me a lot of banter.

On April 11th, I had my first beer of 2015. It was very much welcomed. Thank you to all that
supported me through my challenge! 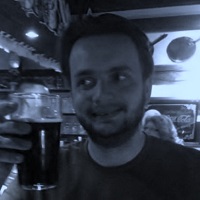 Jonathan is 32 and he lives in Essex. He grew up in Saffron Walden where his parents still live now. Jonathan and Kirsty first met when he was 17. They met when they were each on holiday with their family in Majorca and have stayed in contact ever since. Kirsty and David went to see Jonathan when he was acting at the Edinburgh Fringe 9 years ago.

You can still show your support by sponsoring him – https://www.justgiving.com/Jonathan-Scripps/