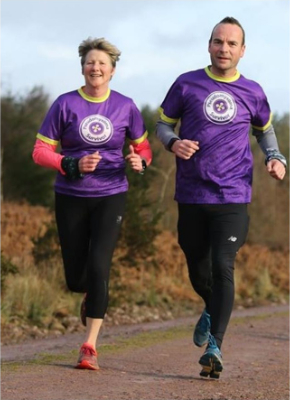 Two and a half years ago, neither Annie or Jim had heard of pseudomyxoma peritonei (PMP). In November 2017, Jim was diagnosed with a high-grade appendix tumour that was the first stage of the disease.

The following February, Jim underwent cytoreductive surgery at Basingstoke Hospital in order to prevent PMP from developing further.  This was a seven-hour operation involving removing the right side of the colon, the right peritonea (lining of the abdomen) and the greater omentum (a large apron-like fold of visceral peritoneum that hangs down from the stomach). This was followed by hyperthermic intraperitoneal chemotherapy (HIPEC) where heated chemotherapy is pumped directly into the abdomen after surgery.

After just under a month in hospital, Jim returned home to recuperate and, after being cared for by Annie, is now back to full strength with only annual scans required to keep an eye on things. Jim was lucky that his tumour was caught at its early stages and that he could have preventative treatment. Whilst on the specialist PMP unit at Basingstoke both Jim and Annie met with others who were not so fortunate and were fighting their own battles against the disease.

Roll forward to 2020 when they had both decided to take part in the London Landmarks Half Marathon (LLHM) and secured places to run in aid of Pseudomyxoma Survivor. Unfortunately, due to the coronavirus pandemic, the race was put on hold. Never two to be deterred by such challenges, Jim and Annie pledged to run half a marathon locally. We’re really pleased to tell you that despite a few more hills than they would have liked with only a couple of horses and a Llama to cheer them along they managed it. It was a very different experience to completing the LLHM and we’re very grateful to both them and their friends and family for their support