Can we stop tumour growth in PMP?

Recent work by Kjersti Flatmark’s team in Oslo, Norway has shown some exciting developments in our understanding of the genetic mutations that can result in people who develop pseudomyxoma peritonei ( or PMP)¹. The GNAS gene controls the switch for cell survival and growth. Mutations in the GNAS gene result in a faulty switch that leads to uncontrolled production of mucin and may drive disease progression in those with PMP. 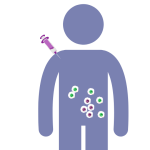 Prof Flatmarks’ team identified a mutation in the GNAS gene in 88% of patients with PMP that had treatment with CRS and HIPEC at their centre in Oslo. Patients with this specific GNAS gene mutation produced an identifiable cell surface protein that could be used as a target for the immune system to attack and stop tumour progression.  By stimulating the immune system of patients with PMP and helping the body recognize tumour cells we may be able to stop tumour growth. This could be done by “vaccinating” patients who have PMP with the mutation in the GNAS gene to help their immune systems identify and destroy tumour cells.

A pilot study to test the safety of this approach is being planned in Oslo and may lead the way to trials in patients with recurrent PMP who have the GNAS gene mutation who are not suitable for surgery. This would be a form of immunotherapy and would be a significant step forward in our understanding and treatment of PMP.