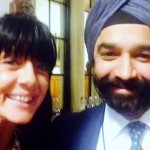 Me and Harpal Kumar

Myself and fellow pseudomyxoma survivor Susan Oliver were invited to a meeting hosted by Cancer 52 at the House of Lords. Cancer 52 is an umbrella organisation that represents rare cancer charities in the UK. The keynote speaker for the event was Harpal Kumar, CEO of Cancer Research UK (CRUK).

During the meeting, we had a chance to listen to strategy proposals set by CRUK, the largest charity for cancer research in the UK. They aim to raise overall 10-year cancer survival to a huge 75% within the next 20 years. The figure was just 25% in 1970, and 50% in 2010.

It may also come as a shock to many of you to learn that the percentage of patients diagnosed with a rarer or less common cancer in the UK is now 53%.

Pseudomyxoma Survivor also got a mention as I have recently been appointed as a member of the new Rarer Cancers Action Group hosted by EURORDIS (European Organisation for Rare Disorders). I am so privileged to be just one of four members of a prestigious group as this. 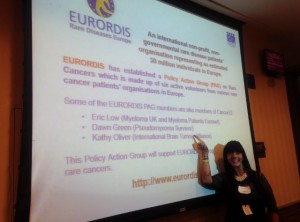