My waist kept expanding over a period of seven months

I was working as a daybaker and would come home and fall asleep on the sofa soon after I got home. I was exhausted and, despite exercising regularly and watching what I was eating, my waist kept expanding over a period of seven months. I also experienced some back pain that felt like my muscles were torn apart (like Velcro). I thought I’d injured my back lifting and moving boxes of supplies in the bakery refrigerator. When my mother asked me if I was pregnant I began to feel unsettled. 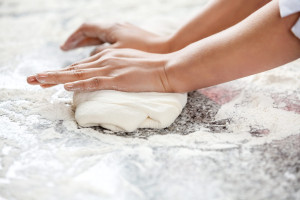 I went to my regular physician who gave me a prescription for muscle relaxants for my back and a note to give to my employer to take a few days off to rest. At the end of the examination, she asked if I was pregnant and I said “No”. She didn’t pursue the issue of my increased girth and I walked out of her office – looking back it is clear I was in a state of denial that anything was wrong.

Three months after this, I reported to work despite feeling fatigued and ridden with back pain but left within an hour after informing my employer that I was going to the hospital.

I went to the emergency room and was there for 12 hours, being poked, prodded, scanned, x-rayed and asked repeatedly if I was pregnant. That part was a bit annoying. Otherwise, I can’t complain about their care. They fed my mother who was with me and was very worried about me – but no food for me because they wanted to do a CT scan.

I was admitted to hospital that night being told “You are full of something bad.” and that a specialist would see me in the morning. I was too hungry to be worried and after the night nurse gave me toast with jam, I fell fast asleep.  My mom stayed up all night at home worrying with my dad.  The next day, the doctor came and told me he suspected ovarian cancer and two days later they operated removing 15 pounds of mucin, my appendix, my omentum, did a full hysterectomy and sent a tissue sample to the pathology lab. The doctor suspected stage 4 ovarian cancer. After a couple of days of recovery in the hospital, I was sent home to wait.

It was now the beginning of December and it wasn’t until the beginning of February that I got a call from the doctor saying that “It’s not ovarian cancer, it’s cancer but not cancer and we’ll need to see you regularly at CancerCare”. I said “Ok” and he ended the call.

I sat on the sofa relieved on one hand (no ovarian cancer – yeah!) but bewildered on the other (it’s cancer but not cancer – what!?!). So I called him back.

He told me not to worry and he’d answer my questions at our next appointment in 2 weeks. At the appointment he told me “We’ll monitor you – the treatment is watch and wait. If it reappears, we’ll deal with it.”

He never told me the name of my condition and I didn’t ask – I can’t explain why I didn’t except that I hadn’t learned to be assertive as I am now!  It wasn’t until almost 1 year later when another physician was covering for him during his absence that I learned the name of what I had. The covering physician strode in saying “So you’re the Pseudomyxoma Peritonei! I’m Dr __”.

I asked him to repeat that – he said his name again – and I started laughing. “No, I mean the name of the cancer, and write it down. I need to Google it when I get home.” He was much more forthcoming than my regular doctor and so I finally learned what I was dealing with.

Two years after my initial surgery, I underwent a second laparotomy and had an ulcer repaired. I was hospitalized for five days then sent home to recover. Six weeks later, I was back at work full time.

I had a third laparatomy four years after my initial one and lost part of my stomach and my gallbladder. They sculpted me a new belly button which I thought was kind of nice — but not as cute as my original.

One year after this, my belly button was lost for good. I had sought another option other than laparotomy when my belly began to grow yet again. I had been bothering my doctor about the possibility of chemotherapy after having read about CRS/HIPEC online. He continually rebuffed me saying the only treatment was to “watch and wait”. After being cut open by this doctor three times, I knew that he would keep pruning parts off of me till I withered and died. Not for me!

So when the second doctor came in saying “There is another way to treat this — it’s…” and I jumped in with “CRS/HIPEC”, we knew we understood each other and were going to get things done. Manitoba doesn’t have any surgical team trained to do this specialized surgery so it took a bit of time but within six months I was in Calgary at Foothills Hospital for 21 days. My surgery took over nine hours and, at the end, I was lighter by a spleen, a few other bits and bobs, 12 pounds of mucin and was up a permanent ileostomy. I had HIPEC. My recovery was complicated by excess fluid in my

My recovery was complicated by excess fluid in my lungs but the staff were wonderful. I returned to Manitoba believing I would get the follow-up chemotherapy the surgeon told me about in Calgary that should have been within three months. It took five months until I began the six-month regime. I completed the regime and walked away thinking it was over for at least a few years. But make plans and God laughs. Just a year after the CRS/HIPEC, a CT scan showed that a tumour had permeated my mesentery and surgery was not possible due to the location. I’ve been through 18 months of chemotherapy — 52 hours every two weeks — and this has made the tumour “stable” — no growth — my hair very thin, steroids for anti-nausea added 50 pounds to me and I get tired easily. I have neuropathy and nerve damage to my right hand (this followed the CRS/HIPEC) but these are all manageable. My ileostomy bag and I are now good buddies and I’m comfortable with it. My bi-weekly chemotherapy sessions are keeping me alive and are my new norm. It all beats the alternative.