Last year, I pledged to do 30 Days of Biking. It’s a global challenge to ride your bike every day in April, any distance, any destination. For every 30 people to pledge, they donate a bicycle to a child in need. 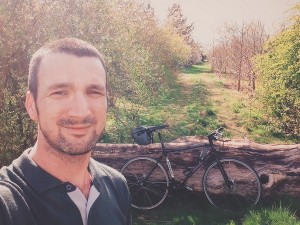 I never got to fulfil my pledge though. My Mum, Carol Grocott, had been previously treated for Pseudomyxoma Peritonei, a rare form of cancer. Sadly, she became ill again and was hospitalised at the end of March 2014 and remained there until she passed away at the end of April 2014.

My Mum had found out she had cancer almost by chance, following an emergency appendectomy in 2009. The cancer was treated by having the right side of her colon removed and two rounds of chemotherapy over a period of a few years ensued. My Mum hated the chemotherapy and found it difficult to tolerate. By mid-2012, it was also clear that it had little effect on the cancer. Mum was left with few options, but she was determined.

It was later in 2012, that Pseudomyxoma Peritonei was identified and Mum was referred to Basingstoke Hospital, a specialist centre for this type of cancer. Mum had Complete Cytoreduction surgery in early 2013. This was a massive 13-hour operation which involved removing the lining of her of her abdomen, the large bowel, rectum, gall bladder, spleen, ovaries and uterus. Then the abdomen was washed out with hot chemotherapy. Despite being a traumatic process, we were told 100% of the visible disease had been removed. Mum recovered quickly and in a matter of months was rejuvenated. She adjusted well to life with a colostomy bag and made the most of her second chance. Mum returned to work full time as a specialist nurse, went on holidays again and became a Grandmother for the first time. Mum enjoyed all that life had to give her.

This year, I’ve pledged again to do 30 Days of Biking. I’m doing this in memory of my Mum. As I pedal along I would like to raise funds for Pseudomyxoma Survivor. I’ve kept a personal blog, where I write about each day’s riding.

Please give whatever donation you can at: https://www.givey.com/carol