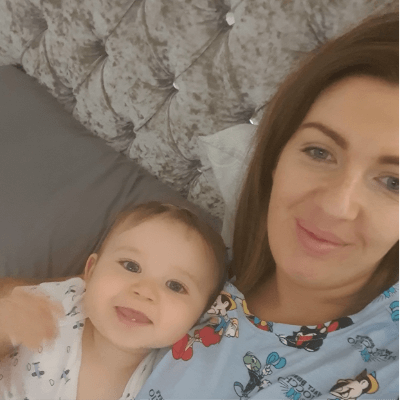 Hi, my name is Jemma and my story started back in July 2020. On July 1st, I was awaiting to go into theatre to have a planned c-section due to my baby boy being in the breech position. During the surgery, whilst I was lying on the operation table, I was told

“Oh, there’s an issue with your appendix. We’ll need to get another surgeon across to remove your appendix. There seems to be a tumour-like growth on your appendix and there is mucin leaking around your abdomen.”

Two weeks later, I receive a phone call to attend a appointment at the Belfast City hospital to meet Mr Lee, an oncology surgeon. During that appointment, I was told I had a low-grade mucinous neoplasm (LAMN) of the appendix, a type of appendix cancer. Mr Lee also told me that the surgeons had tried to remove as much of the leaked mucin as they could during the delivery of my baby boy. I was then told I’d have to go through various tests and CT scans to see if there was anymore tumours in my abdomen and that I would have to fly to a specialist canacer hospital in England to have an operation.

Fast forward to January 2021 and I got the phone call from The Christie Hospital in Manchester. I was told that they where finally able to arrange a pre-op appointment with me and book my surgery as I had LAMN and had developed pseudomyxoma peritonei (PMP). I was told what I would need to have removed during surgery. This included both my ovaries and gallbladder, peritoneum and omentum and stub of my appendix and belly button. I was warned to expect a big scar down the middle of my abdominal area.

In May 2021, during the coronavirus pandemic, I finally managed to fly to Manchester to my pre-op appointment and on May 5th 2021, I had my cytoreductive surgery with HIPEC.

I spent two weeks in hospital to recover before I could fly back home to my lovely 10-month old baby boy. This was the first time I’d spent a night away from him, not to mention having to fly to Manchester on my own due to covid restrictions and spending two weeks in hospital with no visitors but I got through it with the amazing help from the team at The Christie Hospital.

If it wasn’t for my miracle baby boy who decided to be stubborn as stay breech during my pregnancy, I might have never known I had LAMN/PMP and if it wasn’t for the amazing surgeons at the Christie Hospital I may have been a much serious way. Thankfully, during surgery there was no evidence of any mucin or tumours so they only removed what was planned at the pre-op — both ovaries, gallbladder, omentum, belly button, etc.

I’m now three months post-op and I’m still learning to live with my new scar and pains and backache from surgery. I’m still not being able to lift my son and I’m learning about the menopause at 30 years old but I’m glad I went for the surgery.