I was diagnosed with pseudomyxoma peritonea (PMP), aged 32, after many months of stomach pains, bloating, constipation and irregular periods. After numerous trips to my GP, which led to an ultrasound and eventually a CT scan, I was told I had a nine centimetre tumour on my appendix which had burst and leaked cancerous mucin into my abdominal cavity.

At the time of the scan they couldn’t tell exactly how far the disease had spread. It wasn’t until my big operation, five months later, that the true extent was revealed: the cancer had spread all throughout my abdomen from my diaphragm down to my bladder. I had an extensive nine-hour surgery which included the removal of my peritoneum, omentum, spleen, right colon, appendix, ovaries, fallopian tubes and gall bladder, as well as parts of my liver and diaphragm. They also scraped some bits of disease off my uterus and bladder before pumping a heated chemotherapy solution into my abdomen to kill off any remaining cancer cells.

Before my surgery, I had two rounds of egg harvesting in order to have some of my eggs frozen. This can be physically and emotionally a very draining and stressful experience under the best of circumstances, never mind when you’ve got the dark cloud of life-changing surgery looming. But I knew I wanted to have children one day and so for me, having the egg harvesting procedure was a no-brainer. I still have my uterus, and so hopefully, with IVF, I will one day be able to conceive and carry a child. 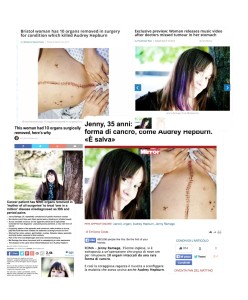 Recently, in a drive to raise awareness of the disease I decided to share my story with a local newspaper. It got picked up by a national news service and the next thing I knew, my face – and my scar – were in newspapers all around the country and beyond, with media outlets all over the world printing my story. It was even covered on a BBC news programme.

Since then I’ve had messages from several PMP patients who said they found my story really encouraging, and that it’s helped them feel less ‘alone’ in having this very rare condition – being diagnosed with PMP can be a very isolating experience, and it helps to know others who have been through the same thing. I’ve exchanged messages and spoken with several of them on the phone, one of whom was just about to undergo her MOAS¹ and was terrified. It was so nice to be able to reach out to her and offer her some support and reassurance.

This campaign has really grown legs, with more survivors coming on board who want to do their bit too – and it’s wonderful that it’s all helping more people access the support they need. For a rare disease that requires such highly specialised surgery, raising awareness is crucial. The more people who know about PMP, the more lives can be saved. Not only that, but the more people will be able to access the practical and emotional support they need – and which the Pseudomyxoma Survivor charity provides in abundance.

Jenny is 35 and lives in Bristol. She had her operation for pseudomyxoma peritonei (PMP) in November 2012 and has made a full recovery. She edits a blog about fundraising and makes music for video games.

1. MOAS – mother of all surgeries, a term used to describe cytoreductive surgery and HIPEC.