So, this is my Pseudomyxoma story and I didn’t think I’d be running after cytoreductive surgery and HIPEC…

In 2014 I went to my GP, sick of having horrendous periods. As I had ovarian cysts and had fertility treatment, I was sent for an ultrasound scan… I was told I had a weird looking ovary??? I then had a stroke… oh yes… so rather than risk an anaesthetic, I had a CT scan and then a MRI.  Those still didn’t give the doctors any idea what was going on!

So they risked a biopsy. I woke up without an ovary, a fallopian tube or my appendix. The next day was the first time I heard the words… pseudomyxoma peritonei (PMP) and the fact that I would need to go to Basingstoke hospital, as one of two hospitals in England that can carry out specialist surgery for PMP.  That all came true after the biopsy confirmed the PMP diagnosis. I am so grateful that the gynaecologist had seen it before and recognised the jelly.

In May 2015, I had my cytoreductive surgery (CRS) and heated abdominal chemotherapy (HIPEC), eight hours in surgery and 16 days later I was on my way home. I felt blessed that I was low grade and lucky to be on the mend.

Now I am three years on and show no evidence of disease (NED) and I’m thankful for every day. I felt after that I had been given another chance at life and that I had to look after my body from now on. 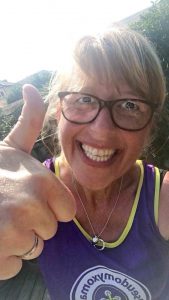 I tried to start running, but unfortunately developed a hernia which got fixed 18 months ago. So, I started again and in just over 6 months, I’ve gone from 0km to 10km runs. So to thank Pseudomyxoma Survivor for all the support I was given and all the friends I have made through the charity, I’m doing the Southend 10K to raise funds for the charity. I would have been so alone and desperate without the charity and I cannot thank you enough x

Please sponsor me via my Facebook fundraiser as I’d love to get to £500, I will be very grateful and I’m sure Pseudomyxoma Survivor will be too.

In November 2017, Jim was diagnosed with a high-grade appendix tumour.