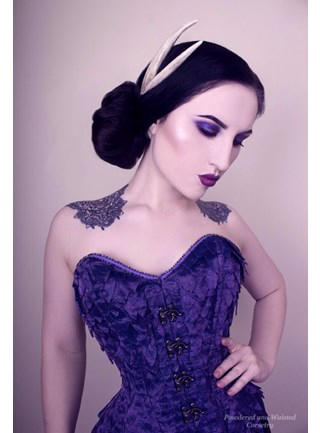 Debi from “Powdered and Waisted” has made this very special corset for a special reason.

She met Pseudomyxoma Survivor’s founder, Dawn Green, through a mutual friend. As was Dawn’s way, they soon were talking and Debi soon knew about the charity and Dawn’s failing health. They connected immediately as Debi had lost her mother to cancer in 2012. In fact, it was her sense of loss following her mum’s passing that had led Debi to corsetry.

Dawn fell in love with Debi’s Dragon Corset. The construction of the corset gave her the comfortable support she needed after several operations. Debi agreed to make a corset for her to wear at a charity event.

Unfortunately, Dawn’s health failed before Debi had taken the final measurements. Following Dawn’s passing, Debi kindly offered to still make the corset  to raise awareness of PMP and the impact of cancer of the loved ones left behind as well as to raise money for Cancer Research UK in memory of her mum and for Pseudomyxoma Survivor in memory of Dawn.

It’s difficult to for us try and explain how much work has gone into a piece like this. It’s all hand made and the process to make the ‘dragon scales‘ is very detailed, it’s been an education for us to be a part of this corset being crafted!  Debi will give a much better description than us of the construction of the corset and she does on her JustGiving page.

By giving a minimum donation of just £5 via Debi’s JustGiving page for Pseudomyxoma Survivor or her linked ‘Cancer Research UK’ page, you will be entered into a draw to win this corset. You can enter as many times as you like in multiples of £5, meaning if you donate £10 or £20, you will have two entries or four respectively.  The draw will not take place until the Once the total target for both charities is reached, the draw will take place and the winner announced. This total amount reflects the normal retail value of this corset.

Debi is donating the full costs of all materials used and the time taken to create this corset. The models featured, photographers, MUA and hair stylists have all given their time and creativity to produce the images.

Full details of entry to the draw and how the winner will be announced are shown on Debi’s JustGiving page.