Update for Splenectomy patients in the UK 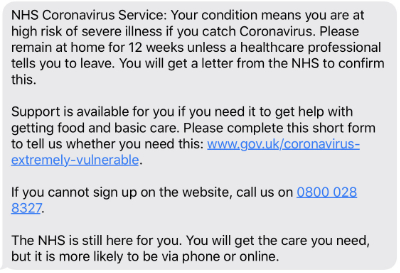 Yesterday it was announced by NHS England and NHS Digital that Splenectomy patients should be formally included on the Shielded Patient List, as they are considered extremely vulnerable.

There have previously been many mixed messages about splenectomy patients. These patients were identified by central database searches carried out by NHS Digital and received letters from NHS England and NHS Improvement recommending they follow the shielding advice. General Practitioners who inadvertently removed patients with splenectomy from the shielding list have been contacted and informed to reinstate patients and explain the error.

From April 29th, NHS Digital will be able to identify these patients central. They will write to GPs to clarify the lists and expect to be contacted (again) in the next few weeks.

There has been lots of debate within our Facebook group about splenectomy and whether or not patients might or might not need shielding. The specialist centres have also provided mixed guidance regarding this too. Hopefully this now addresses everyone’s concerns and may require otherwise pseudomyxoma peritonei (PMP) and appendix cancer patients, including those who have no evidence of disease, to reconsider their personal circumstances in light of the new recommendations.