The disease was actually growing out of my belly button!

I found out about my cancer in a roundabout way, but when I look back there were signs. 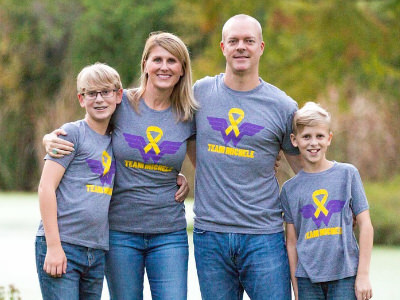 I do an exercise class and I was having trouble keeping up and my belly was growing with no changes to my diet. In my head, I was thinking that was just signs of perimenopause and that was my new figure. Some women just have a muffin top at 44, right? I was also going to the restroom for frequent urination. I was under the care of a urologist for that at the time of my diagnosis.

The disease was actually growing out of my belly button! I thought it was just some unhappy skin. I started with a GP and he said it was nothing to worry about and prescribed a round of antibiotics. I asked what to do if it was still there after the antibiotics and he told me to see my dermatologist. I ended up at my dermatologist two weeks later and they said it appeared to be something with my urachus not closing up from childbirth. When I got in the car, I called my urologist as I thought she might want to know I was leaking urine from my belly button and she called me that afternoon to say I was getting the runaround. She looked at an old scan and I did not have that condition AND if I did have it, it would have been there my whole life and not just appear in my 40’s. She ordered a scan for my abdomen that day to see what was going on in my stomach. The night of the scan, my urologist called me to say that I had a football size tumour on my one of my ovaries and that she was referring me to an OBGYN/Oncologist/Surgeon. We met him the next day. That was Wednesday, July 19, 2017, and he did my surgery on Monday, July 24th. Like so many other women, we originally thought it was ovarian cancer.

The day after the surgery, we learned from my pathology that it was pseudomyxoma peritonei or PMP. I guess that makes it about a week from when the dermatologist misdiagnosed the skin coming out of the belly button to when I got the labs from my surgery. I am not sure how long it would have taken me to know otherwise. I was in the hospital for one week in Austin and that is when we started researching where to have my next big surgery.

After looking into three surgeons in three cities, we went with Dr. Keith Fournier at MD Anderson. No regrets!! My surgery was November 15, 2017. It was 13 hours long and the HIPEC¹ was given with no further chemo following the surgery. I took a digital picture frame loaded with pictures of my children, family, and friends to the hospital with me. I would stare at that for hours and it just made me happy. Then the nurses and doctors got to see a glimpse of my non-hospital life.

My stomach would not wake up after the MOAS² and HIPEC and I was on a PICC³ line for 8 weeks. That was no fun and showering was a pain. I am stilling getting my energy back and I have to go to bed really early. My friends came out of the woodworks and I felt so much strength from that. I was in hospital for three weeks and spent another week in Houston for post-op treatments. Then I was able to come home to Austin on December 13th. I had home health care until January 2nd.

During my recovery, I binge watched things. I did not have the concentration to read much, but I enjoyed watching movies and TV shows.

My abdomen was riddled with disease and it is hard to believe that I could be cured. My surgeon said that he was 98% sure he could get it all. That is almost like 100% right? Then my surgery was a success. Unlike skin cancer, where the mole is removed with a clear margin, this cancer feels so much harder to beat. All it takes is one cell left behind and it can start all over again. I can tell you that I am WAY more intentional with my time left on this earth.

My husband and brother have been amazing. They did all the note taking as I would hear one bad thing and check out completely. My friends and family were amazing and I kept a blog website that kept me going and my friends and family informed. I got cards, texts, and emails. My mom and mother in law took turns staying at our house to take care of our children (11 and 14) while my husband stayed in Houston with me. The support group was a help too. 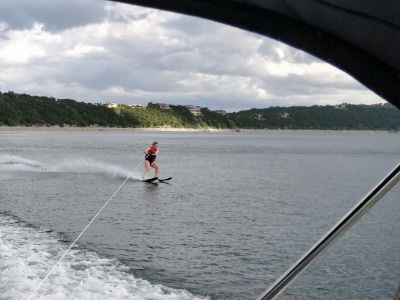 I am happy to say that at seven months out, I am almost back to myself. I have some pain from the incision and trouble sleeping (mostly hormonal). I did quit my teaching job and I am working part-time at home to keep me from getting bored. Right before I got sick, we bought skis because I can’t wakeboard and then I was not able to go into the water from my surgery last July. Last weekend, I was able to ski again for the first time in 25 years. I am back in my exercise class with modifications or my core and I am eating what I want.

The biggest change I had to make after surgery was to recognise my physical limits. I am a busy person and it was hard for me to sit still and let other people take care of me.

You need to remember, if something feels off, see your doctor. It is hard having a rare cancer. Get help from a therapist or support group. It feels like a silent illness as I looked so healthy to be about to have this big 13-hour surgery. The HIPEC procedure almost sounds made up. Know your pathology. I love the support group, but I get so caught up on people’s stories, but they might have different cells. Every person is different.

This story is in Michele’s own words. Thank you for sharing, Michele!

Heated chemotherapy, delivered directly into the abdomen, after complete cytoreduction.  If the surgeons are able to remove the all the tumours, you will be given a heated chemotherapy drug.  This is usually Mitomycin C. This is put directly in your abdomen while you are in theatre and the chemotherapy is left in for 90 minutes.  HIPEC will penetrate tumour nodules up to 2.5mm in size.  The heat increases cytotoxicity of chemotherapy

Chemotherapy given into the abdomen during surgery is called intraoperative chemotherapy.

“Mother of all Surgeries”

This is a nickname for the big cytoreductive surgery – full peritonectomy and HIPEC. It was thought up by the wife of an appendix cancer patient some years ago on her blog.

A PICC line is a long, thin, flexible tube which is used to give you chemotherapy and other medicines. A doctor or nurse puts it into a vein above the bend of your elbow. It can stay in place until your treatment is over.