Being diagnosed with pseudomyxoma peritonei (or PMP) came as a huge shock. It was discovered accidentally as my usual yearly bloods showed abnormalities. My GP suggested an ultrasound because my kidney numbers were slightly down. 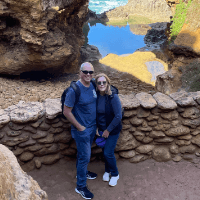 It was during the ultrasound that the technician discovered some abnormalities in my peritoneal cavity. It was recommended I have a CT scan, then a biopsy. Still no-one knew what I had and the results came back as benign tumours, so my family and I were all very relieved. However, the doctors still needed to find out what the ‘tumours’ were so I was referred to the wonderful Dr Brian Meade, who is a colorectal surgeon in my hometown of Brisbane.

My husband and I were squeezed in to see him and he explained what he thought it might be in layman’s terms and explained that we wouldn’t know for sure until he put a camera in and had a look around, his words. From what we understood, I possibly had a leaky appendix and that the leaky bits could stick in my peritoneal cavity and this is what the ‘tumours’ might be. The laparoscopic surgery was scheduled for the day before Christmas Eve in 2020.

It was to be three weeks after that I finally got the diagnosis of PMP as everyone had gone on holidays over Christmas, including my GP. Not at any stage during all those tests and doctor visits did anyone mention the C word! In my mind, they would be able to just remove my appendix laparoscopically and clean up the any of the ‘sticky bits’ left behind by the leaky appendix. So when we finally saw Dr Meade in January 2021 and he explained the diagnosis and procedure we were in complete shock. I remember asking my husband to pull over on the ride home so I could throw up! It took days/weeks for it to sink in and lots of research, where I came across this group. Thank goodness I did 🙏🏻

After jumping through many ‘testing’ hoops surgery was scheduled for early May 2021. My husband and I took a two week road trip and just enjoyed each other’s company and time out from everything! It was much needed and gave me a whole new lease on life! I had cytoreductive surgery with HIPEC (hyperthermic intraperitoneal chemotherapy) as scheduled and the surgery took approximately eight hours. My husband and family were wonderful.

We have three grown sons, two of them live in another country. Trying to explain it all to them over a video call was hard. First it wasn’t cancer then it was, then the diagnosis was something weird that no-one had heard of, next I was to face this massive surgery and we were in the middle of the Covid-19 pandemic, so for them to even contemplate coming home and be here for support was a huge undertaking. We tried to shield them from how big the surgery actually was BUT there’s this thing called the internet and they found out anyway. The airfares were huge with very long flights and there was Hotel Quarantine for two weeks at a cost of almost AUD400.

We kept telling them not to come but my eldest son and his wife ignored us and came out anyway. They got out of quarantine two days after I got out of hospital. They were a huge support and I’m so glad they ignored us and came out anyway. It was wonderful for all of us (our whole extended family) and I’m 100% positive my recovery was aided just by them being home. My family and friends were my whole world before and after surgery and I thank God for them all every day. Especially my wonderful supportive husband of 34 years, I couldn’t have done it without him!

The length of the surgery surprised me the most. I was terrified I would not wake up as you can see from this, I did! After surgery, having to rely on others to do almost everything for me was the biggest adjustment for me. After all, I’m the mum, mums take care of of everyone else!

When I was diagnosed, I found out that there was only one surgeon and one hospital in the whole of Queensland that performs cytoreductive surgery with HIPEC. It’s a very specialized field. In Australia, there is only 1 in 1.5 million people each year¹ diagnosed with this cancer and it was very hard to find anyone else who had even heard of the disease. I was ready to face It when we came home. I’m four months post-surgery now and my health is much better. Not by any means am I back to my normal fit self but recovering well physically. Mentally, it’s always in the back of your mind whether or not the disease will re-occur in the future².

My advice for anyone recently diagnosed is to get as fit as you possibly can before surgery, lean on those who offer support and spread the word because no-one has heard of it or even knows what the symptoms are. Before you go to hospital, dig deep and find strength and resilience, you’re going to need them.

Virginia’s story is in her own words and we thank her for sharing it with us. 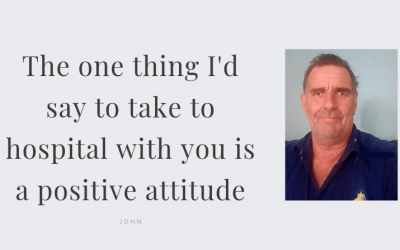 I thought I had a hernia

John went into hospital for a hernia operation. Afterwards, he was told that it wasn’t a hernia but a ‘small, bloody mass’. The pathology came back as pseudomyxoma peritonei (PMP). 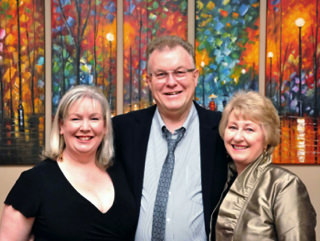 I had flu-like symptoms and was diagnosed with PMP

Initially, I had flu-like symptoms with pain in all the joints in my body followed by bad abdominal pain that did not go away. 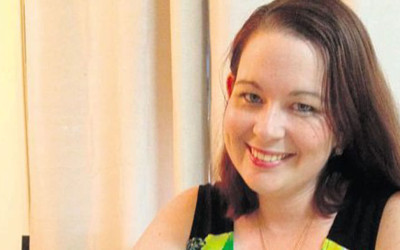 One brave step at a time, Davina’s one-in-a-million cancer diagnosis

Davina Knight stays positive in the face of one-in-a-million cancer diagnosis and she shared her story with The Morning Bulletin.