I certainly didn’t think my diagnosis would be low grade mucinous appendiceal neoplasm.

Dr. Robertson told me looking concerned after the results came back from the CT scan. Dr. Robertson is no relation to me or my husband even though we share the same last name. I was having trouble with a dull ache in my right side that had recently moved into my right pelvic area in my back. I was not in severe pain like you would expect for appendicitis. “Are you sure you feel ok?” he asked again. He told me that he had arranged for me to see two surgeons, a colorectal surgeon for the appendix and an ob/gyn surgeon for the endometriosis that had been previously diagnosed 36 years ago on my right ovary. He felt that the appendix definitely needed to be removed and he was unsure if the ovary was a problem, too.

I did eventually get the “appendicitis” pain two weeks later which was before I went to the colorectal surgeon. Of course, no one believed the radiologist’s report which included the ruptured appendix that I carried with me to the emergency room. I didn’t have the CD-ROM with the CT scan on it for the ER doctors to look at and form their own opinion. A second CT scan at the ER showed an enlarged appendix, instead of a ruptured appendix, which didn’t qualify for an emergency appendectomy.

I was in extreme pain that day for 12 hours in the ER with no fever, no nausea except what was caused by the pain medicine, and no elevated white blood cell count. Even though I didn’t have other symptoms, the severe pain made up for it. It felt like a knife had been plunged into the right lower quadrant of my abdomen and went straight through my pelvis. I could barely walk I was in so much pain. It was unrelenting. The young surgeons who saw me that day told me I didn’t have appendicitis and read off the symptoms as if recited from the textbook. I knew that I didn’t have textbook appendicitis but does anyone really have “textbook appendicitis”?

The ER doctor came in to release me since no one would do surgery. She told me that she was going to send me home with straight oxycodone (no acetaminophen) and if I needed to come back, she would have standing orders of morphine every two hours until someone would operate on me. She had put down my diagnosis as “chronic appendicitis”. So I went home.

Still in extreme pain at home, I called the on-call doctor for the colorectal surgeon I was scheduled to see. The on-call doctor was the surgeon I was supposed to see. I told him about my pain and he told me that my pain should have occurred two weeks ago when the CT scan showed a ruptured appendix. He said I should go back to the ER if the pain continued which is what I did.

I went back to the ER again at 4:00am the next morning and to the standing order of morphine every two hours. Finally, at 7:30am I was told my surgery would be set up for that afternoon. Just knowing that something was going to be done made me feel better. I was going to have an appendectomy on my 56th birthday, March 19, 2013. Considering the circumstances, this was the perfect birthday present.

“Your diagnosis is low grade mucinous appendiceal neoplasm”, said the young resident who was working with the colorectal surgeon who had done my surgery when I returned to the office for my post-surgical exam. He was describing what they had found during my surgery while I was having an out of body experience — not really feeling like it was me he was talking to or about. He said they had found this sticky, green mucous in my abdomen that was thick and hard to remove.

Oh, no, I was thinking, I’ve been “slimed” like in the “Ghostbusters” movie. Do I have cancer, I thought? This couldn’t be me. Finally, he said it was cancer. Then he said it wasn’t. After that, he admitted that he had never seen this before and he didn’t know if it was cancer or not. He said he would ask my surgeon to explain the findings.

The surgeon came back in with the resident and confirmed that it was indeed cancer since the appendix had ruptured and there was spread to the abdomen. He assured me that there were no other “tumors” in my abdomen and he had taken steps to thoroughly clean all of the mucin out. He explained the next step could be a major surgery to remove part or all of my colon or other organs; or if I wanted to, I could choose “watch and wait” which sounded better than the former to me. In any case, he wanted to refer me to an oncologist because he was certain that it would come back and that monitoring was necessary. He also told me that he would present my case to the tumor board because it was very rare and ask for their recommendations on my next step. 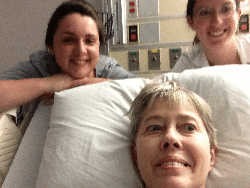 Me trying to do a selfie in the hospital bed at Wake Forest Baptist Hospital with my favorite nursing assistant and the medical student who took such great care of me.

I cried as I was driving home from my doctor’s appointment. Then I picked myself up when I got home and googled “low grade mucinous appendiceal neoplasm” because I needed to know everything about this new enemy. That’s when I found the term pseudomyxoma peritonei. I had actually heard of this term before while in school in the early 80s and I had learned that it was usually fatal. I was devastated.

I found details online of other survivors who had had the major surgery mentioned by my surgeon, called cytoreductive surgery, in which all visible signs of disease are removed and hyperthermic intraperitoneal chemotherapy (HIPEC). The chemotherapy is pumped into the abdomen after the surgery and sloshed around (shake and bake) to rid the abdomen of microscopic disease that cannot be seen or removed by the surgeon.

This surgery is also called the Sugarbaker Procedure named after Dr. Paul Sugarbaker who developed this aggressive approach. At first it scared me. The thought of a 10-hour surgery in which half of the colon, gallbladder, spleen, uterus, fallopian tubes, ovaries, and omentum are removed is hard to comprehend.

I decided to have this surgery and sought out the advice of an appendix cancer specialist, Dr. Edward Levine of Wake Forest Baptist Hospital, who had more than 20 years of experience and had done more than a thousand cytoreductive surgeries. I knew that going into this surgery I had very little visible disease and my surgery should not be as bad as some of the ones I had read about. My surgery lasted five hours which is not long considering the average is 10 hours. My omentum, left ovary, and a short section of bowel surrounding the appendiceal stump were removed. I recovered with very few problems. I did have an incisional hernia repaired in June, 2014. Now after my 18 months post-op CT scan, I have no evidence of disease. 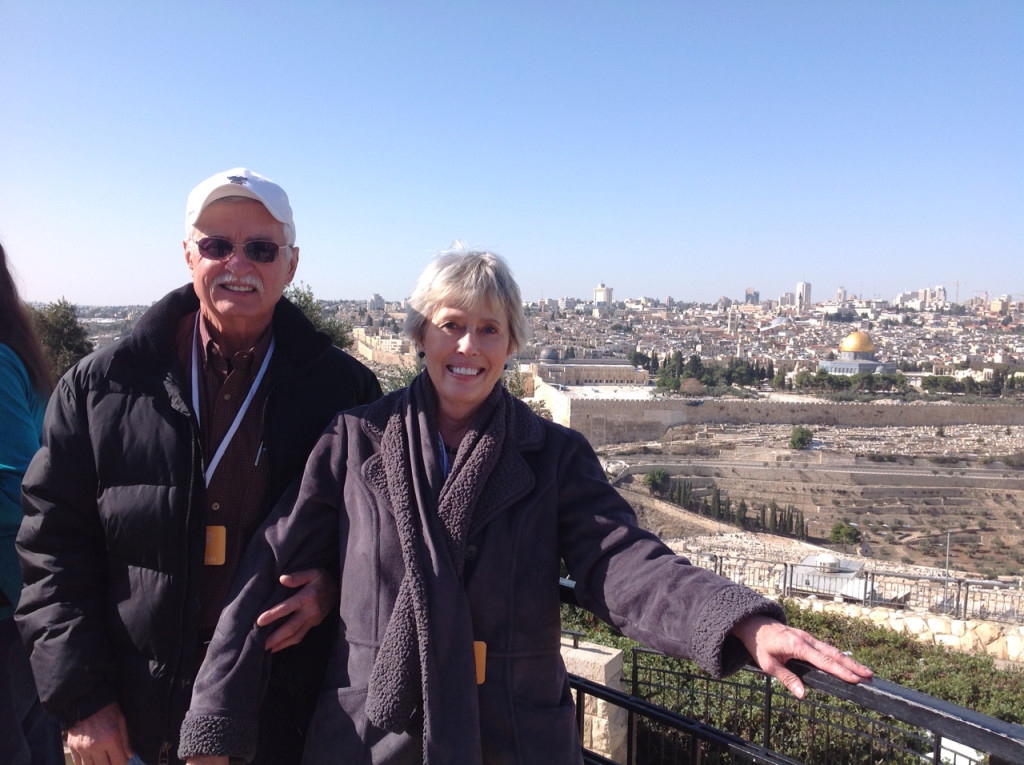 Appendix cancer has changed my life and made me aware that there are things that I want to do and see before I die.  My bucket list has consisted of mainly travel items thus far including trips to Israel and Italy.   It has given me a new sense of purpose.  I also want to be involved in helping those who have been recently diagnosed.

Emily has been working as an Environmental Health Program Specialist (Health Inspector) for the Pitt County Health Department in Greenville, NC for over 25 years. Her work is in the Children’s Environmental Health Branch which involves child care and school inspections; lead investigations; indoor air quality consultation; and meth lab remediation. She graduated from East Carolina University, which is also in Greenville, NC, with bachelor degrees in biology and computer science. She also attended medical school for over two years. She has been married to the love of her life for almost 34 years and together they have two grown children. Her hobbies include singing in the choir, playing the piano, and participating in church activities. She is a pseudomyxoma peritonei survivor