I was convinced I had gallstones but it wasn’t gallstones

I’ve always had a sensitive tummy and suffered from irritable bowel syndrome for years, but when I started to experience a sharp pain under my right rib and a swollen, uncomfortable feeling when driving to the right of my belly button, I knew something wasn’t right. A few weeks later, an elderly relative was admitted to hospital with gallstones and, after researching her symptoms online, I was convinced I had the same problem. I pestered my GP to refer me for an ultrasound which eventually showed I had no gallstones, but “a fair amount” of fluid around my liver.

A week later I had a CT scan which revealed I had fluid throughout my abdominal cavity — on my liver, diaphragm, appendix, spleen, ovaries, rectum and uterus. Five days later on September 9th 2014, aged 34 and otherwise fit and healthy, I was told by my GP it was highly likely that I had a very rare condition called pseudomyxoma peritonei (PMP). My worst fears were confirmed when he uttered the words “It is a type of cancer”.

He then explained that it could often be treated with extensive surgery at a specialist ward in Basingstoke — three hours from my home in Norfolk. He didn’t know much else about PMP, so my husband and I researched it online and found the Pseudomyxoma Survivor website. Reading about other people’s experiences gave me so much hope and strength — I wasn’t alone with this disease! 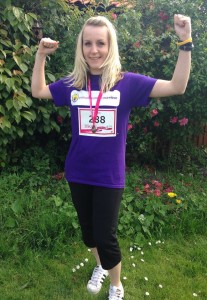 Three months to the day after my diagnosis, I had over eight hours full cytoreductive surgery performed by the amazing team at the Basingstoke & North Hampshire Hospital. I had my gall bladder, spleen, appendix, peritoneum, lesser omentum, greater omentum removed along with a full hysterectomy. I also had a ‘chemo bath’ where Mitomycin-C chemotherapy, heated to 42 degrees, was poured into my abdomen immediately after the surgery. I also had two further intraperitoneal chemo sessions to kill any bad cells lingering in my abdomen. I now have an eleven inch scar (my battle wound!) down my middle of which I’m rather proud!

Fortunately, my treatment was successful and I had no major complications after surgery. It was the toughest two weeks of my life, but the team of consultants, doctors, nurses and healthcare assistants were brilliant. I’ve also been very lucky to have the love and support of an amazing husband and great family and friends.

Apart from a few toilet issues and fatigue, my recovery over the past few months has also been pretty good. I have good and bad days, take antibiotics twice a day as my immune system is suppressed. Daily hormone replacement therapy has helped alleviate some menopausal symptoms. I was pushing myself to walk up to two miles each day just four weeks after surgery, driving after twelve weeks and working part time after sixteen weeks. Three months post surgery, I even ventured 3,555 metres up Tenerife’s Mount Teide in a cable car!

Having PMP is the worst thing I’ve ever been through, but I fought it, beat it and never gave up hope. I’ll never cease to be amazed at how strong my body can be and how precious life is.

Louise, aged 35, is an artist and scuba diver and lives near Norwich. She had surgery for pseudomyxoma peritonei at Basingstoke Hospital in December 2014 and is recovering well. She is currently writing a blog about her PMP experience: https://mypmpexperience.wordpress.com.